Why Millennials are Moving to Phoenix 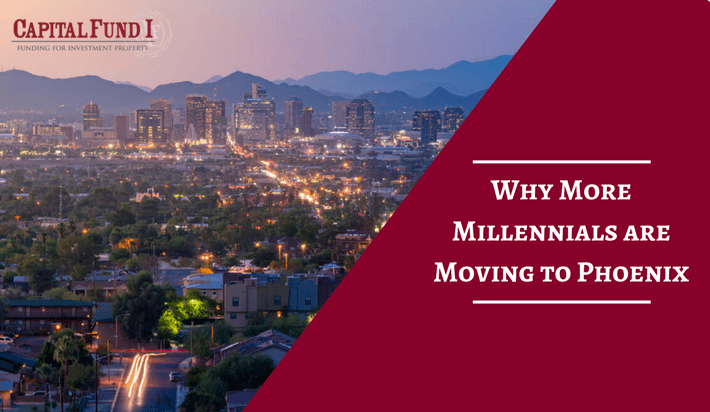 Phoenix is widely considered to be a booming city in the U.S. As the capital of Arizona, this remarkable city boasts constant warm temperatures and year-round solar radiation which undeniably attracts thousands of tourists annually. More prominent is the city’s rapidly growing metropolitan region widely known as the Valley of the Sun. Phoenix is no longer a place for college kids and retirees. There’s been an influx of millennials moving in and putting this area in the national spotlight. Phoenix is now going from a lower-ranked city for millennials to one of the best places for millennials to live.

Here are the top seven reasons why millennials are moving to Phoenix.

Affordable housing prices are apparently appealing to anyone, and this is a no-brainer for millennials. This essentially means that most out-of-college millennials prefer getting a home mortgage that primarily falls within the range of their college apartment rent. Standard home prices are affordable to young adults employed in top institutions or developing promising startups. And the best part is that home taxes in Phoenix are significantly low compared to other developed cities in the U.S. As a house hunting millennial, make Moon Valley your next pit stop.

Unilateral Acceptance of the Digital Economy

Tech companies have undoubtedly received overwhelming support in Phoenix, AZ, thanks to the city’s rapidly evolving urban youth. As a testament to its dominance, Uber recently established a Center of Excellence aimed at employing hundreds of individuals to facilitate the enrollment of drivers and riders in cities worldwide. When in Phoenix, Uber services can be accessed virtually everywhere with Sky Harbor International Airport serving as an economic hub and link for the city’s rapid development. In fact, Uber self-driving cars are tested in Phoenix.

Phoenix temperatures offer an ambiance that promotes healthy living, creative thinking, and socializing in various circles. Part of being a millennial is enjoying what life has to offer. Phoenix is a warm, sunny area, and this beautiful weather continually attracts thousands of millennials willing to escape the unforgivable winter climate in other states. As a millennial, you might want to engage in various outdoor activities such as hiking and mountain biking to marvel at unbeatable sunshine throughout the year. Millennials never pass up the chance to hail the sunny days that have eclipsed gloomy days in other icy cities.

If you are a millennial, then you’ll know that hard work complements playing hard. This typically means that the friendly people and diverse outdoor activities should be more than enough to cap off a prosperous week at the office. The weekend is the ultimate time to let go and board a party bus or even go quad riding. With a wide range of bars, clubs, and lounges with a variety of music, there won’t be enough hours in the night to enjoy it all. Whatever your hobbies are, you can rest assured knowing that Phoenix has got you covered.

Phoenix’s canyons and mountains offer the perfect spots to meditate and engage in some mental healing. Engaging in meditation helps to aid in lowering stress and cholesterol levels. It makes perfect sense to grab a few friends and plan a hiking trip to Fossil Creek or Sedona and experience jaw-dropping settings. Since millennials are the hyperactive groups with social tendencies, putting health concerns as a priority makes sense if they intend on being productive in the long run.

The Influx of Jobs and Businesses in Phoenix

Wherever youths converge, posts tend to come up. Over the past few years, Phoenix has experienced significant economic gains with the monogram, “open for business,” dominating social media and SEO engines. The Office of Economic Opportunity expounds that 100,000 new private sector jobs have been formed to capitalize on the rapidly growing population. Various reasons to move to Phoenix expedite the creation of steady environment and tax policies crucial to rewarding success and work ethic.

Interestingly, the majority of Phoenix residents are foreigners compared to a small percentage of locals. By embracing diversity, Arizonans have gone a step further in promoting cohesiveness and networking to enhance creativity and innovation. In essence, you are free to shape your destiny in Phoenix with barely any racial or religious grounds holding you back.

The above reasons act as pointers on what to expect when moving to Phoenix. If you’re a millennial looking to invest in real estate in Phoenix, then don’t hesitate to contact Capital Fund 1 for unrivaled funding and investment services in Phoenix and beyond.