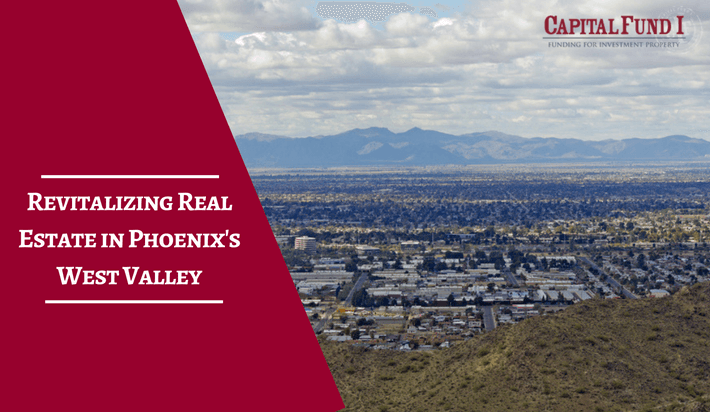 The Phoenix Metro Area’s West Valley was hit hard during the great recession.  Tract home developments were halted and deserted, home prices dropped, and commercial properties had increasing vacancy rates.  The West Valley became a ghost town in some places, and in others, it had little life.

Nowadays, you wouldn’t recognize the West Valley of 2007 with the one we have in 2018 today.  The abandoned tract developments are beginning to see new activity and companies are choosing to move out to the West Valley.  Population and job growth are beginning to see growth after nearly a decade of slow recovery, and the Maricopa County Government is prepared to help with its improving economic health.

The West Valley is the subject of many large companies and businesses as their next office, warehouse, or development facilities.  Companies like Amazon, Nikola Motor Company, and UPS have chosen the west valley to be their new home for a number of reasons such as the amount of available land to build on, the growing population, as well as the close proximity to freeways such as the I-10 and Loop 303 which will provide easy access to California and Nevada alike.

Some of the largest lease signing from the first quarter of 2018 actually include Amazon and UPS choosing to have their facilities in Buckeye and Goodyear respectively.  Nikola Motor Company, which is going to have a newly built facility, will be located in Buckeye as well, close to a residential community that will be home to over 300,000 residents that would be ideal for future employees.

It is no wonder that the Greater Phoenix Economic Council estimates over 50 percent of Maricopa County’s growth will be on the west side of the valley.

With the increasing population of the total Phoenix Metro Area, new homes are required to help support and house the incoming population.  Many of the previously abandoned tract developments, and some infill lots, are becoming the sites of new residential developments which will provide closer housing to the new jobs coming to the west valley.

Looking at year over year growth, Buckeye has seen a 14% increase in new single-family building permits from last year, Goodyear has seen a 27% increase, and Surprise a whopping 131% increase.  This is a significant difference when the east valley is actually seeing a decrease of single-family building permits in Scottsdale, Paradise Valley and Gilbert, and only a few cities like Mesa having a small increase.

How the Government Plans to Help

The Maricopa County Government has plans to invest in transportation projects that will help accommodate the growing population in the West Valley.  These projects will help improve traffic flow between the loop 303 and loop 101, cutting down on time spent commuting from place to place.  This, in addition to West Valley government and business leaders helping to build more accessible entertainment and shopping options, will help encourage the incoming population to choose life in the west valley.

Another investment on the government’s behalf includes infrastructural improvements to help prevent flooding.  One project, for example, is the recent renovation of the dam near the I-10 and Jackrabbit Trail, which is expecting tens of thousands of people to live downstream from it in the next few decades.