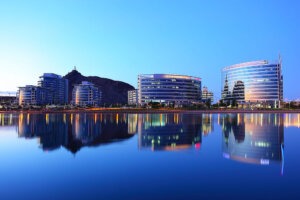 It’s no secret construction for commercial real estate has been booming along Tempe Town Lake for the past several years. Commuters are all too familiar with the roadblocks and construction along Mill Avenue.

Marina Heights has boosted the interest in Tempe as an office market.

“I believe the area will continue to develop for many years to come,” Genovese said. “The Grand at Papago is an impressive project under construction that, when built out, will materially change the complexion of the north side of the lake. ASU is planning to redevelop the golf course and baseball stadium sites along Rio Salado, which will add additional density to the area along with additional sports facilities being discussed as possibilities.”

Genovese said he believes the popularity of the Tempe Town Lake area is due to the surrounding amenities.

“Obviously, water is a rare commodity in the desert and even more scarce as an amenity to an urban neighborhood like Tempe,” Genovese said. “The ‘lake’ is situated next to one of the largest universities in the country, making it accessible to a large, vibrant young workforce and energetic population. Additionally, the lake provides a unique landscape and views for the surrounding office buildings, and it’s conveniently located to the airport and freeways.”

For the fourth consecutive quarter, Tempe led all submarkets with 333,821 square feet of positive net absorption, according to the CBRE report, citing the city’s ideal location, walkable amenities and proximity to Arizona State University as the three main reasons commercial real estate is drawn to the area.

In this last quarter, the 250,000 square feet of State Farm offices at Marina Heights was brought online, and construction started on the area’s latest project Rio2100 — set to be 100,000 square feet, according to the CBRE report.

“It takes time for neighborhoods to mature. It was not long ago that 24th Street and Camelback was a gas station and shopping center,” Genovese said. “Density of population, responsible development, time and quality employment are key drivers in seeing communities develop into thriving centers like Scottsdale and Tempe.”

Tempe and Scottsdale submarkets are expected to continue to see the highest levels of activity in the year to come, according to the CBRE report.