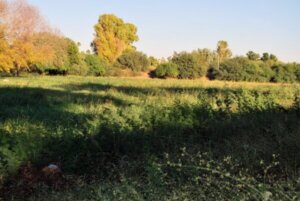 A view of the yet to be plotted 4.4-acre lot locals refer to as “The Jarvis Property” within the Town of Paradise Valley. (Independent Newsmedia/Melissa Fittro)

The development stars could be aligning as a new effort to develop what locals call “The Jarvis Property” appears to be afoot.

The 4.4-acre parcel, which is owned by Town Triangle, LLC, is at the northwest corner of the alignment of Northern Avenue and Scottsdale Road. The property abuts the Camelback Country Club Golf Course and is adjacent to the Indian Bend Wash and Cheney Estates.

Both the general manager at the Camelback Inn, Jim Rose, and Cheney Estates HOA president, Mark Brachfeld, have authored letters of support for development of the project.

In order for that development, the prospective developers have myriad zoning regulations to overcome embodied in the following pending applications at the Town of Paradise Valley:

Proponents of the project are hosting two citizen review sessions for the proposed development and General Plan amendments.

Mr. Edmunds, who has come out of retirement to develop the triangle parcel adjacent to his own neighborhood, says he is looking to find a happy medium for nearby residents.

With proposals that have included a church, a charter school and most recently senior living facilities, Mr. Edmunds says a housing subdivision with similar lot sizes to Cheney Estates makes the most sense.

“I am probably at the tip of the triangle, maybe 500 feet away,” he said in an Oct. 5 phone interview of why he has interest in the difficult-to-develop parcel.

“I have lived here for 16 years, love my home, love my location and I don’t want to move. I have seen a lot of different ideas for the parcel but none of those really worked for the parcel. Most if not all were trying to overbuild the site.”

Along with Mr. Cullum, Mr. Edmunds has entered into an agreement to purchase the parcel but is not yet the owner of the land, records show.

“We have the land under contract, but we haven’t bought it yet,” he explained.

“The key to this parcel is that it abuts Scottsdale Road, it abuts the wash and 70th Street. If you go from Doubletree to the south end of Paradise Valley, you have very few 1-acre lots. We are not in any position where we are anywhere near 1-acre lots. This lot has never been platted so it really is a blank canvass.”

Mr. Cullum says he was a bit reticent to take on the complex development effort as a portion of the lot is within a federally designated flood plain.

“It is a very cumbersome, time sensitive and expensive,” Mr. Cullum said in an Oct. 5 phone interview. “For a custom homebuilder if we didn’t have the development experience I would not have tackled this. Geoff is putting in hundreds of hours on the FEMA flood plain issues.”

While those looking to build on the site contend the numerous zoning maneuvers needed will not create a new precedent for Paradise Valley development, Mayor Michael Collins is not convinced.

Mr. Cullum says he was a bit reticent to take on the complex development effort as a portion of the lot is within a federally designated flood plain.

“It is a very cumbersome, time sensitive and expensive,” Mr. Cullum said in an Oct. 5 phone interview. “For a custom homebuilder if we didn’t have the development experience I would not have tackled this. Geoff is putting in hundreds of hours on the FEMA flood plain issues.”

While those looking to build on the site contend the numerous zoning maneuvers needed will not create a new precedent for Paradise Valley development, Mayor Michael Collins is not convinced.

“So far the only application being presented to the town council on this project is a special use permit to allow for a private gate off of Scottsdale Road,” he said in an Oct. 11 statement.

“This item is a future agenda item for the town council sometime in November. I hope this is not a predictor of a piecemealed approach to project review, or games being played by the applicant. Just as we’ve seen with the hillside development review process, applicants and their ‘specialized’ attorneys often use tactical and strategic loopholes in the town’s processes and procedures to achieve a competitive advantage during the review of their project. I personally find it hard to issue a statement of direction on a gate to a potential subdivision that is yet to be reviewed or approved.”

Mayor Collins says promises have been made to local residents — and he intends to keep that promise, he contends.

“In 2012 the town council made a promise to Paradise Valley residents,” he pointed out.

“We asked residents to approve zoning for higher density residential within our three resort development areas — Mountain Shadows, Ritz-Carlton, and the Hyatt Andaz/Smoketree Resort areas. We did that to incentivize resort redevelopment, as a measure to secure longterm financial stability and security for our town.”

“We told residents that in exchange for allowing higher density residential zoning in these three specific development areas, that we would strictly prohibit the upzoning of 1-acre residential property anywhere else, thereby preserving Paradise Valley’s 1-acre per home density standard. Now we see the first of likely many, applications for amendments to the 2012 General Plan, to allow high density housing all across our town. It clearly contradicts the promise made to residents and the fragile development balance that was presented to, and approved by 80 percent of the voters.”

Mayor Collins says he expects certain arguments to emerge from the applicants of the project.

“I’m sure we will hear from the applicant that this property is a one-off, a uniquely disadvantaged property, where traditional 1-acre residential zoning is not ‘appropriate,’” he said.

“My concern is that this very same argument, albeit with potentially lesser substantiation, could be used all across our wonderful town, enabling more high-density housing throughout all of our neighborhoods. While the location of this existing 1-acre residential property may create an economic disadvantage to the developer, I’m not yet convinced that it is my job as an elected official to work to maximize individual property value at the expense of the greater community.”

Mayor Collins says the General Plan is more than just a guideline — it’s a philosophy that is followed in the Town of Paradise Valley.

North Valley News Editor Terrance Thornton can be contacted at 623-445-2774 or attthornton@newszap.com