Originally Published in the Arizona Daily Sun on October 6, 2016 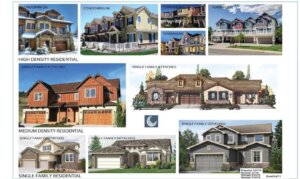 The Flagstaff Planning and Zoning Commission will decide next week whether to advance a proposed 1,300-home subdivision with frontage on West Route 66 and Woody Mountain Road to the City Council.

On Wednesday, the commission heard the first presentation on Timber Sky, which will require annexation from the county to the city of more than 100 acres, as well as several zoning changes to accommodate different uses.

The development, which would be led by Vintage Partners, a Phoenix-based group in charge of several other commercial projects around Flagstaff, would encompass a total of 197 acres and would have 100 residences reserved as permanently affordable housing. Those units would be priced at $220,000, which, according to the staff report, is based on what is affordable to a household earning the area median income.

Of the 1,300 units, 492 would be in multi-family housing structures and 808 units are scheduled to be single-family homes.

“The majority of the development proposed is suburban, with pockets of higher density and a piece of commercial to support all area types,” Antol said.

Most of the property is currently zoned as rural residential, which is described in the zoning code as “appropriate for both housing and limited agricultural uses that preserve the rural character.”

The code says the current zoning allows for larger single-family homes, but also has opportunities for cluster and planned residential neighborhoods.

Traffic, water and sewer and drainage impact analyses were completed before the Planning and Zoning Commission meeting.

Antol said the city and the Arizona Department of Transportation have negotiated mitigation efforts for traffic issues along Route 66, most of which is controlled by ADOT, as well as city streets that will be impacted by the development.

The improvements agreed upon by Vintage Partners and city staff center on the Woodlands Village Boulevard intersections with West Route 66 and University Avenue, along with a left turn lane from Route 66 onto Flagstaff Ranch Road, Antol said. Vintage Partners agreed to provide the city $1.5 million to contribute to these and other roadway improvements.

The Timber Sky development will also be required to build an extension to a sewer system, which will be partially  reimbursed by the city because a portion of the extension was a planned and budgeted city project for 2021, Antol said.

Antol pointed out that the land where the development is proposed does not have the water infrastructure required to support a community of that size, so the developer will be required to install at least one well and dedicate it to the city.

Antol said a stormwater study for the area said most of the runoff will be directed to an existing culvert that flows under Route 66 and into the Clay Wash Detention Basin to discharge into the Rio de Flag watershed. Antol said portions of the eastern part of the property that drain into a culvert underneath Woody Mountain Road, and under the Presidio in the Pines development, but she said developers will either direct the flow away from that area and into the other culvert, or will be discharged “at a rate at or below the predevelopment conditions to avoid impact to downstream property.”

Antol said the development is proposed within Lighting Zone 1, which is the most stringent of the dark sky restriction zones, due to its proximity to the Naval Observatory. Carolyn Oberholtzer, an attorney representing Vintage Partners, said the developer worked with the Naval Observatory to create even more stringent standards for the community, including limiting the amount of lumens, a measurement of light, that can be produced by outdoor lighting, as well as creating guidelines for motion activated lights.

The last major project proposed for the area was opposed by the observatory as sending up too much light into the night sky. Aspen Heights was a 714-bed student housing complex proposed for 37 acres at the corner of Woody Mountain Road and West Route 66.  The developer withdrew the application in December 2014 after failing to get council approval for annexing a portion of the project from the county into the city. No new plans have been filed for the parcel.

The commission is required to hold two public hearings before voting to send the changes to the city council to review and for a vote. The second hearing will take place October 12 at 4 p.m. in the city council chambers.