Vacation Seasons for Rentals in Arizona 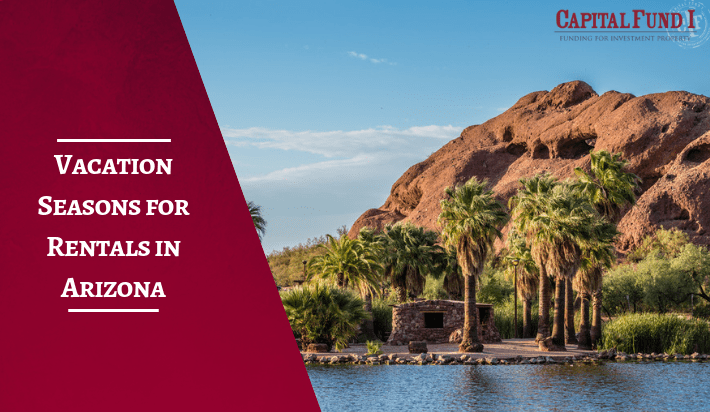 There is a reason why terms such as “Tourist Season” and “Snowbird Season” exist in Arizona, and that is because these vary from different times throughout the year. However, unlike a typical summer, fall, winter, spring type of season, these will actually be different depending on the city your property is in AND the normal season. Take a look at the types of “seasons” these Arizona Cities have.

Whether they are from Canada or one of our Northern cities, people are trying to escape the snow between Mid fall to mid-spring down here in the valley. Snowbirds are likely to stay for a month or longer during this time, so you’ll want to make sure your vacation rental is well equipped to take on a long-term stay than what you may be used to.

Baseball is America’s favorite pastime, and even more so with the number of Major League Baseball teams that have made the valley of the sun their spring training location. With 10 different stadiums that host spring training games, a variety of people from all over the US will be following their teams to cheer them on. Spring Training visitors. Spring training takes place between mid-February to late-March. Depending on the visitor, you may have people staying for a weekend or the entirety of the season.

Vacation Seasons in Flagstaff and Other Northern Arizona Cities

While Flagstaff may not be the only Arizona city with a ski resort (I promise I’m not ignoring you Sunrise Park, Mt. Lemmon, and Elk Ridge), Snowbowl does get numerous visitors from all over Arizona. Because ski season requires snow, it is typically mid-winter to mid-spring but has been known to start earlier or last longer depending on snow conditions. These visitors may spend just a weekend or a full week to enjoy the slopes, and relax at one of the many coffee houses the downtown area has to offer.

Being an hour away from the Grand Canyon is a huge draw to many of Flagstaff’s visitors, and brings people from all over the world just to visit. On top of that, being close to historic locations like Williams and Winslow also draws a crowd of many people. You will also experience people trickling in to visit all parts of northern Arizona, such as Sedona’s red rock hiking and arts, Prescott’s forests, and for those willing to put up for the long drive head up to Lake Powell in Page. This will typically take place in the summer when it’s warm (but not sweltering like the rest of Arizona). These vacationers, like ski season, will likely be with you for a week or the weekend, but in some cases can stay longer.

Vacation Seasons in Tucson and Other Southern Arizona Cities

Similar to the Greater Phoenix Metro’s snowbird season, Tucson also attracts people fleeing cold and snowy weather. These visitors only differ from the Valley’s by these visitors preferring higher elevation, as temperatures are relatively the same between the locations this time of year.

Despite being under Tucson, all 3 of these cities experience the rush of incoming students from August into September. Parents of students will sometimes choose to stick around a little while longer, to help their student get situated, and can take as little as a weekend to up to a full week or more.

Now that you know the different seasons of Arizona, you can now decide where you’d like to own your vacation rental. Once you’ve found one, give us a call to get you situated with financing.